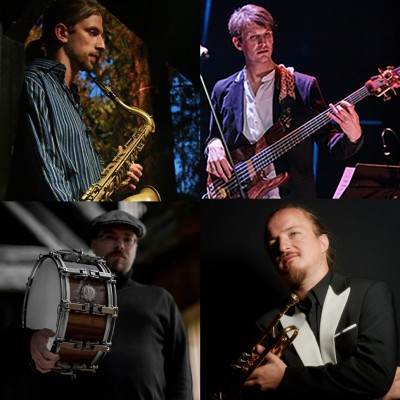 The event is cancelled due to bad weather forecast.

Lenart Krečič, a saxophonist, arranger and composer is a native of Slovenia. He completed Masters of Music degree at NYU and BFA with Academic Honors at The New School Jazz and Contemporary Music studies.
He has studied with some of the finest musicians in the world: John Purcell, Billy Harper, Reggie Workman, Joe Lovano, Chris Potter, and John Scofield to name a few. Studying with John Purcell and incorporating physics, Krecic gained an extensive knowledge about saxophone mechanics, saxophone acoustics and acoustics of saxophone components.
He has recorded and performed with: Billy Harper, Reggie Workman, Joe Lovano, Chris Potter, Kenny Werner, Gerry Hemingway, Don Friedman, Matthew Garrison, Kenny Davis, Jean-Michel Pilc, Junior Mance, Tyshawn Sorey, and Marcus Gilmore. In 2010 he released his album “Chain of Sounds”, which features bassist Kenny Davis and two special guests: Chris Potter and Marcus Gilmore. Chain of Sounds is a suite that consists of 8 movements (elements) and is a canvas of many different styles that contribute to the unique style and sound of Lenart Krecic.
In 2011 he returned to Europe and recorded 2 CDs that will be released this year: Almost Blue with Peter Mihelich and Ode To Heroes with Thana Alexa Pavelic and Antonio Sanchez. He is also a member of Momento Cigano led by guitarist Teo Collori, and Veselino Jazz Project led by Croatian bassist Luka Veselinović.

Tadej Kampl is one of the best slovenian bass players, who started playing bass at young age. He graduated at the Conservatory in Klagenfurt with prof. Uli Langhtaler. He visited City college in NY City, USA. He was also taking lessons from Denis Irwin and Matthew Garrison. Later on he also took lessons from Guru Pandit Suresh Talwalkar in Pune, India.

Kristijan Krajnčan (Slovenia, 1986) was born in a family of musicians and started playing classical cello at five and jazz drums at the age of ten. After he finished Music High School on both instruments he moved to The Netherlands, where he graduated jazz drums at the Prince Claus Conservatory (Groningen, 2009) and obtained Masters in Composing for Film at the Amsterdam Conservatory (Amsterdam, 2013).
As a drummer and cellist he is featured on 26 records and has performed in more than 25 countries in Europe, USA, Asia, Indonesia, Middle-East and Africa. As a film-music composer he scored three features and nine short films. He scored the 1st Prize jury award “Jazzon” for best Slovenian jazz composition (Slovenia, 2006), Best Screenplay Award at Arab Film Festival (Rotterdam, 2016), Best Director Award at Festival of Slovenian Independent Film (Slovenia, 2006), 1st Prize of National Competition for classical musicians of Slovenia (1997 and 2003), Semi-finalist of Thelonious Monk Jazz Competition for Drums (Washington, 2012), Finalist of the Dutch Jazz Competition (Netherlands, 2008), Participant in “Dave Douglas Workshop: Creative Composition and Improvisation” at Carnegie Hall (New York, 2010).
He has directed several short films and music videos of classical, jazz, chanson and rock genres. His latest short film “And Suddenly It’s Evening” was shown in the competition program of Festival of Slovenian Film (September, 2015).
“DrummingCellist” is his most recent solo project, in which he performs both drums and cello; classical music and jazz. Krajnčan has always been interested in connecting conflicting ideas, because for him “in its inner core, there is no difference between Bach and African music”.