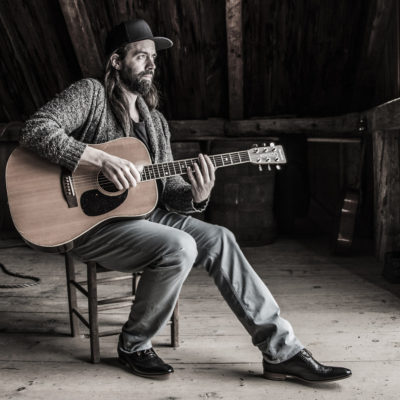 An evening of original compositions by guitarist and composer who explores a wide range of genres and contemporary folk practices and opens them up to an ethereal, free sonority.

Guitarist and composer, Shaun Ferguson offers modern, free and transcendent instrumental music. A native of the Acadian Peninsula in New Brunswick (Canada), he captivates his audience with his charismatic personality and his musical flights that appeal to both enthusiasts and less informed audiences. His first album Ascensions was released in 2011. He presented his second album Resilience in December 2017. Self-taught, Shaun Ferguson has been guided by his instinct to learn to play, compose and exploit sounds that

vibrate in harmony with his musical ideas. Through his collaborations with other artists, he has transposed his skill from the guitar to cello, bass and other stringed instruments and percussion. Shaun enjoys enjoys taking part in projects combining poetry, visual arts (or dance) and music. For the last ten years, some of the artist’s compositions have traveled around the world (through the Montrealbased company Intermède Média). To date, the public has been able to hear excerpts from their plays in documentaries broadcast in Canada, the United Kingdom, Denmark, Australia, Spain, France, South Korea, Japan, in Hong Kong and the United States.

Julien Breau’s passion grew with him in a family of musicians, in St-Isidore, New Brunswick, Canada. It was at Bowdoin College (Brunswick, Maine USA) that he acquired his musical education. Versatile, Julien can go from jazz to traditional, from classical to electric. In 2003, an internship in Nashville with bassist Victor Wooten allowed him to further his artistic approach, giving him the opportunity to perfect both theory, composition and presence on stage. We heard Julien among the bands, La Virée, Aboiteau, La belle Amenchure, Prenez-Garde, La Trappe, J’m’en rappelle, Mathieu D’astou, Sandra LeCouteur, Calixte Duguay Symphonique and Nathalie Renault with whom he made hundreds of shows for several years.

Originally from Moncton, New Brunswick, Canada, Marie-Andrée Gaudet is a violinist with two masters in music (violin solo, chamber and orchestra). She has performed with several professional orchestras, including the Estuary Symphony Orchestra, the Quebec Symphony Orchestra, the Nova Scotia Symphony Orchestra, the New Brunswick Symphony Orchestra and has been violin of the Université de Moncton and Laval University orchestras. Winner of numerous awards at the Greater Moncton Music Festival and New Brunswick Arts Council Scholar, she has been a violinist for several documentaries by the National Film Board and for musical theater productions. A member of various national and international music groups, her classical training allows her to bring a personal touch to traditional and popular music. Since 2011, Marie Andrée Gaudet has played in Europe, North America, South America and Africa.